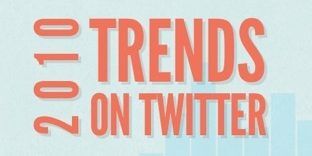 As we have noted some time ago, the information being collected at Twitter is astounding. With twitts being posted at the speed of about 38.000 per minute, and if my math does not fail me, the total amount of posts this year will reach a staggering twenty billion. Now that is a huge number.

Twitter has put out its top trends for 2010. Some of the items on the list seem logical. Some seem to indicate that the world has gone crazy. Others that I am getting old, too soon, too fast. In any case, here is my two cents worth of thoughts on this list:

1. With the US accounting for about one third of all visits to www.twitter.com (source: Alexa) there is a majority of topics that are relevant to this country. For example the number one trending subject for 2010 had to do with the most publicly scrutinized event of the year in the US: the oil spill in the gulf of Mexico which is also the largest accidental marine oil spill in the history of the petroleum industry (source: Wikipedia.org).

Apart from its obvious negative impact on the environment, the economy and the lives of many people, this event has also represented a major setback to the presidency of Obama much like the Hurricane Katrina did to the Bush administration. However, in this case the spill was «one time event» and not a natural disaster that could have been predicted or at least prepared for. Also, while the images of black gold gushing out of the rig was not good for the image of the Obama team, I do not feel that the international community thinks that the response time and methods used to correct the problem were nearly as dreadful as was the case with Bush and Co.

Unfortunately, another (natural) disaster also made it to the top. Haiti, the poorest nation in the Western Hemisphere was hit buy bad luck again. We all know the rest of the story.

2. Football (or soccer) rules. The FIFA 2010 World Cup with an expected 125 live viewers per match came in second and is closely linked to the noisy Vuvuzela and the dead Paul the Octopus. Since we do not have exact numbers we can not sum up these three trends to see if they surpass the interest in the Gulf Oil Spill.

3. The two most trending names in tech are Apple with its iPad at number 5 and Google with its Android operating system at number 6. Microsoft, while still dominating the operating system world, is out of the picture which doesn´t mean that it is not a cash generating machine (MSFT made an incredible $18.8 billion net income for the year ended June 30, 2010, close to the $6.7 billion and the $14.0 billion that GOOG and APPL made – source: http://finance.yahoo.com/).

Natural disasters and the man made oil spill in he Gulf of Mexico dominate the scene as is logical. However,Hugo Chavez eclipses all other world leaders, including the most powerful man in the world. And even more surprising, the engagement of the future heir to the throne of England pops into the list at number nine. Yes, I did read the headlines about this wedding, but common, this is irrelevant compared to the other topics included in this section. Lets remember that the sun does now set on the British empire.

I confess that I only recognize three of the top ten:

– Lady Gaga who is always in the news and on the radio scantily clothed,

– the notorious Australian Julian Assange of wikileaks and the sexual assault charges,

– and Mel Gibson with all of his love for human kind, except for the jews, the blacks, the hispanics and other unfortunate minorities.

As I mentioned before, I guess I am what the Spanish call a «cuarentón», one of those people reaching the midpoint of their life who are no longer interested those teens and twenty something year old kids.

But I decided I would surf the net to look up the number one pick, Justin Bieber. I breezed over his bio and listened to his song Baby which I admit rang a distant bell. Now I can say that while I am not at all impressed with his lack of talent I can see the (girl) teens going babanas over him. I always like to remind my father that his parents probably said the Beatles, Dylan and Elvis where either perverts or overrated, not nearly as good as the classics. This is now probably my case of being set in my own tracks, too old to try new things.

What we all know, made in Hollywood dominates the boxoffice and the Twitter top 10 trend list and probably even the top 100. Yeah, those international films are more cultural, but culture does not sell movie tickets, neither in the US nor in any other country. Mel Gibson, for some reason, does.

Perhaps they should have called this trend music instead of TV: MTV Music Video Awards, Grammy Awards and the American Music Awards placed first, fifth and tenth respectively. Since MTV also got the Movie Awards to place within the top ten list, perhaps the bracket called TV came from the last two letters of Music Televisión.

Well, even though Google has a second place, Apple actually has four trends in the top ten vs. two for Google. I think this has to do with the fact that Apple sets trends and has one of the best brand images in the world when it comes to the design of new products. Even though Google has awesome website functionalities, the core of the business is its search function which is by now «just a commodity» from which users jump to other websites to gather information.

Surprisingly not a single Spaniard in the top ten despite going all the way. Even a retired Diego Armando Maradona creates more interest that the Spanish team and/or its players. Or even worse, the Spaniards even lose out to a dead octopus.

What is not a surprise is to see the two top players in the world among the top ten in trends: CR7 and Messi.

Lots of basketball, including the King, the Boston Celtics, Tony Parker (probably helped by his breakup with Eva Longoria) and the rookie Blake Griffin at spot 1, 5, 7 and 9 respectively. What is surprising is that there is no Kobe Bryant, the leading active player in the NBA with the most rings on his fingers.

It looks as though 2010 was a year in which we all remembered our youth. Three of the top ten, including the number one spot were taken by #rememberwhen (number 1), #thingsimiss (number 4) and #wheniwaslittle (number 6).

A shame the last place was for a negative comment such as #2010disapointments. True, I have had my share of them too, but I would like to try #thoseawasomethingswedidin2010 or #2011willbethebestyearofmylife-sofar.